The Tallest and Skinniest Bluebird Ever?


This is my first year growing Symphyotrichum laeve, commonly known as 'smooth aster'.

The cultivar I'm growing (which I think is more often found in the trade than the straight species) is called 'Bluebird'.

The only other aster I've grown has been Symphyotrichum oblongifolium 'October Skies' (aromatic aster), which has a very bushy growth habit.

I naively assumed that Bluebird might grow the same way. So imagine my surprise when this single, unbranched stem shot up about 5 feet in the air!

It's recently shown some inclinations of branching near the top - and another stem has emerged from the ground at the base of the plant - so I'm thinking perhaps a clump will develop after all.

For now, it looks a bit funny all by its lonesome growing next to a DeGroot's Spire arborvitae, but I have to respect its toughness and tenacity. When gale force winds toppled a couple of purple coneflowers (Echinacea purpurea) and sent a top-heavy cucumber-leaf sunflower (Helianthus debilis subsp. cucumerifolius) toppling to earth, the Bluebird swayed and bent a little, but ultimately stayed upright (though perhaps looking a bit more...sinuous than before).

I can't wait to see what the flowers will look like! :-)

PS - If you don't want to miss the flowers either, sign up for a free email subscription and you'll get all the updates on Bluebird and everything else in the Garden of Aaron straight to your inbox!
Cultivated by Aaron at 8:00 AM
The Tallest and Skinniest Bluebird Ever?
2015-08-24T08:00:00-05:00
Aaron
aromatic aster|Bluebird aster|smooth aster|Symphyotrichum laeve|Symphyotrichum oblongifolium|
Comments 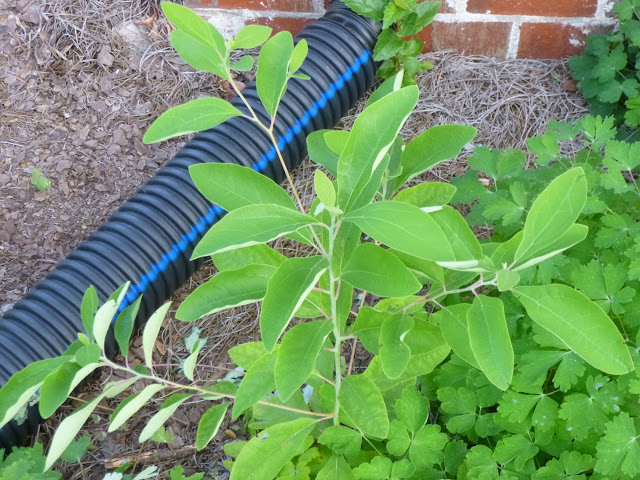 I found this tree sapling growing in one of my foundation plantings right alongside the corner of my house.

What do you think -- Could this be a sassafras (Sassafras albidum) seedling?

If so, do you think there's any chance that I could transplant it successfully elsewhere in the yard? I understand it gets to be a pretty big tree in time, so I don't want it growing right next to my foundation, but I don't know if it withstands transplantation or if it's not even worth the effort to try.

Or am I misidentifying this seedling completely?

In the late afternoon / early evening (just about an hour before the sun goes down), the light shines at just the right angle to illuminate this sunflower from behind.

As the sun shines through the sunflower, for a brief moment the sunflower transmits some of the glory of its namesake.
Cultivated by Aaron at 8:00 AM
Sunny Sunflower
2015-08-17T08:00:00-05:00
Aaron
backlit|Helianthus annuus|sunflower|
Comments


There's this little bunny rabbit in my garden that likes to hop around the perennial borders munching on this and that.

I encounter it frequently in my walks and I think it has become so accustomed to my presence that it rarely bothers to hop away even when I come within a few feet of it.

It's so quiet and well-camouflaged that my biggest concern is that I'll accidentally step on it someday!

In my experience, balloon flowers bloom for months (pretty much all of June and July this year, I think) and if you deadhead them consistently, they'll bloom well into autumn.

Deadheading is not my favorite garden activity, but I think I'm willing to make an exception for balloon flowers because they are otherwise such cheery, tough, carefree, long-lived plants.

(Also, it's not such a chore to deadhead balloon flower compared to deadheading some other plants. The flowers bloom on tall spikes, so you can cut off an entire spike rather than trying to snip an individual spent flowerhead.)

Besides, who doesn't love balloons? :)

PS - Sign up for a free email subscription to make sure you don't miss out on balloons or any other charming flowers!
Cultivated by Aaron at 8:00 AM
Lotsa Balloons!
2015-08-10T08:00:00-05:00
Aaron
99 balloons|balloon flower|Platycodon grandiflorus|
Comments

Getting Fresh with the Natives

Well, here we are - early August, weeks of temperatures in the 90s (car thermometer registered 97 on the highway today), not much rain recently, brutal humidity and an obstinate gardener who insists on letting plants more or less fend for themselves.

Why no sprinkler? No endless hours spent hose in hand? No drip irrigation system feeding precious moisture like an IV to the roots?

Because I want to see which plants are tough enough to stand on their own and thrive amid this fiery crucible.

Because in a world of 7+ billion people where resource scarcity is real and likely to get worse, I want to garden with minimal inputs yielding maximum beauty and ecosystem benefits.

One of the dogmas in gardening these days is that native plants are almost always best adapted to the local climate, so one of the things I wanted to check while I walked around the garden was how the natives were faring compared to the exotics. Here's what I found:


I know this has been a marathon post, but I wanted to provide a somewhat exhaustive (exhausting?) survey to point out that just because a plant is native to a state or region, does not automatically mean that it will thrive in your garden. It may need more sun, more shade, more moisture or better drainage than you can (or want to) provide.

Conversely, it seems to me that many exotic plants are relatively well-behaved (i.e., not invasive or even aggressive) and capable of fending for themselves and adding all sorts of value to the garden - both aesthetic beauty for the gardener and nourishment or shelter for some of the other creatures that share the garden.

I greatly appreciate the value of native plants -- especially when it comes to their co-evolved relationships with native fauna such as Lepidoptera -- but I'm happy to welcome many exotics into my garden.

(On the other hand, while I am tolerant - even welcoming - of creeping or self-sowing natives, I'm much more likely to give an exotic plant the heave-ho if it shows suspiciously aggressive or prolific tendencies. This has to do with humility -- I'd rather err on the side of caution than risk unleashing another calamity on our local ecosystem.)


PS - Which plants will make it to the cool succor of autumn and which will fall by the wayside at the Garden of Aaron? You'll be "in the know" if you subscribe via email today and get automatic updates straight to your inbox!
Cultivated by Aaron at 10:40 AM
Getting Fresh with the Natives
2015-08-05T10:40:00-05:00
Aaron
Amsonia Blue Ice|Arrowwood Viburnum|Baptisia australis|Blue-Eyed Grass|Grey Owl|Heavy Metal switchgrass|Hibiscus coccineus|October Skies aster|partridgeberry|redbud|
Comments