Almost three years ago, I published a blog post extolling the virtues of perennial cranesbill geraniums as groundcovers.

At that time, I did a little kvetching about the fact that the cranesbill geraniums didn't seem to do a great job of attracting pollinators (which is always a high priority for me).

Well, I've added more cranesbills and they've expanded their territory and this year, for the first time, I noticed the 'Biokovo' variety of Geranium x cantabrigiense attracting a lot of bees - both bumblebees and honeybees!

The other cranesbills that I have - 'Rozanne' and a couple cultivars of Geranium sanguineum - don't seem as attractive to the bumbles or the honeybees, but they do seem to generate some interest from teeny-tiny pollinators (probably some sort of hoverfly or tiny wasp).

Anyway, there's no way that my camera is good enough to capture a video of the hoverflies, but I was able to shoot this short film of a bumblebee buzzing his way among 'Biokovo' flowers.

PS - Over time, I've changed my mind on a lot of groundcovers (and other plants). but I still think cranesbill geraniums -- especially the 'Biokovo' cultivar -- make excellent groundcovers, at least in my Tennessee garden!


Why I'm growing Pycnanthemum muticum in my garden...

1) It's native to Tennessee, as well as scattered sites across the Southeast, Mid-Atlantic and New England from Texas all the way to New Hampshire

2) Richard Hawke, Plant Evaluation Manager at the Chicago Botanic Garden, told me that he has seen P. muticum flowers attract at least a dozen types of bees, wasps, flies, moths and butterflies!

3) Hawke also mentioned that short-toothed mountain mint is considered to be deer-resistant.

4) Holly Scoggins, PhD, Assistant Professor of Horticulture at Virginia Tech, told me that P. muticum grows tallest (up to 4 feet) in moist soil, but that it also seems to be drought-tolerant.

5) The foliage has a nice minty scent.

Note: Despite their common name, mountain mints are not true mints (which are in the Mentha genus). In fact, according to the sources I consulted at the Nebraska Regional Poison Center (NRPC), Pycanthemums contain a chemical called pulegone that can be toxic to the liver. Pulegone does double-duty as an insect repellent, and NRPC does say that it is safe to apply small amounts of the plant externally to skin or clothing to ward off insect pests.

Also, some sources I consulted say that mountain mints can spread aggressively, others say they are much less rampant spreaders than 'true' mints. Either way, if mountain mint is happy where you plant it, you should probably expect that it will try to expand. That may not be an issue (especially in its native range) if it's planted with trees, shrubs or other robust perennials, but you may want to think twice about planting it next to any demure or delicate prized perennials.

Do you grow short-toothed mountain mint? If so, what has been your experience with this plant?

Anybody Know Who's Bugging Me?


Found these two interesting bugs in the garden the other day. Anyone know what they might be?


Have you seen any new or unusual bugs in your garden this year? In addition to the ones shown here, I did spot a leaf-footed bug on my window a couple of weeks ago. That was pretty cool!

It's June and the pollinators are buzzing.

The last two posts on lavender and blanket flower have covered some of the buzz, but there's more to come...

Which plants are attracting the most pollinators in your garden?

Put a Blanket On It!

Looking to attract more pollinators to your garden?

Consider blanket flower - in this case, the hybrid Gaillardia x grandiflora, a cross between G. aristata (native to the Western U.S.) and G. pulchella (native across the Southern U.S. all the way from Arizona to North Carolina). 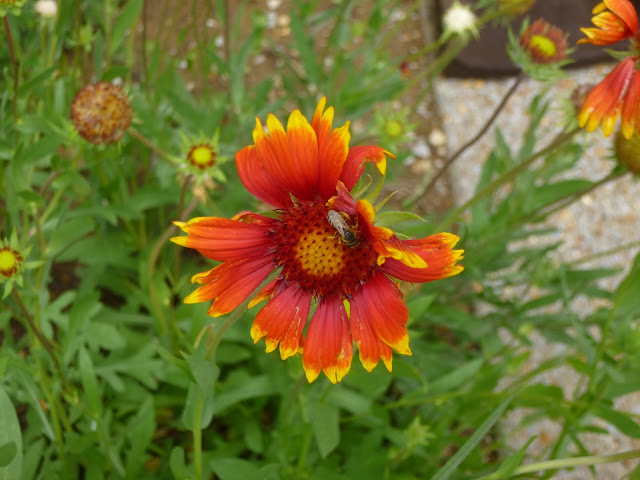 PS - If you'd like to read a detailed write-up on lavender instead of watching the video above, you can find my 2015 paean to lavender here.