Tastiest Plant in the Garden?


Apparently smooth asters are irresistible to rabbits and/or deer...

Are these both Carefree Beauties?

Now that these roses are beginning to bloom, you be the judge - are they the same or two different cultivars? 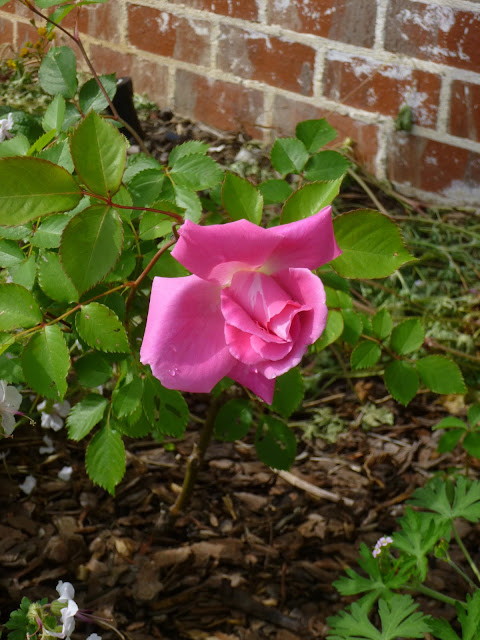 I'm happy with both roses and won't mind at all if they are different from one another, I just find it curious. I also have very little experience growing roses. Perhaps more experienced rosarians could tell me whether such variation is common within named cultivars?

Why I'm growing Ribes aureum in my garden...

1) Although it is native mainly to western North America, there are fairly significant populations not too far west of here in Arkansas and Missouri, plus waif populations in Tennessee and other parts of the Eastern U.S.

4) Missouri Botanical Garden recommends it as one of the best shrubs for heavy clay soils.

5) Pacific Horticulture claims that golden currant fruits are excellent for desserts and jellies. Clove currants are dioecious (meaning cross-pollination must occur between male and female plants in order for the females to produce fruit). Although there are female cultivars like 'Crandall', the straight species plants are generally sold unsexed. I bought two shrubs, but I don't know whether I have two males, two females or one of each. If I get lucky and cross-pollination does occur successfully, then the female shrub should produce fruit.

Do you grow clove currant? If so, what has been your experience with this plant?

Note: Commenter HKCL mentions below that currant growing is banned or restricted in certain states, such as New Jersey. I could not find an official list of such restrictions in the U.S., so here is a link to a recent unofficial list.


Why I'm growing Senna marilandica in my garden...

1) It's native to Tennessee and throughout much of the Southeast and Midwest.

2) Missouri Botanical Garden says it can tolerate both heat and humidity.

4) According to University of Florida, it serves as a host plant for cloudless sulphur butterflies.

5) Per the Georgia chapter of the North American Butterfly Association, wild senna also serves as a host plant for sleepy orange butterflies.

6) The Midwestern Native Garden says that Senna marilandica flowers attract bees and some butterflies, while secondary nectaries attract ants and lady bugs that protect the plants from predators. The book also indicates that wild senna serves as a host plant for other butterfly species including little yellow, silver-spotted skipper and gray hairstreak butterflies.

8) The U.S. Fish and Wildlife Service says that wild senna seedpods are an important source of food for upland gamebirds.

Do you grow wild senna? If so, what has been your experience with this plant?


Why I'm growing Fragaria virginiana in my garden...

1) It's native to Tennessee and across much of the Continental U.S.

2) According to Michael Kost at the University of Michigan Matthaei Botanical Gardens and Nichols Arboretum, wild strawberry flowers attract pollinators, while the small fruits that follow are edible for both people and wildlife.

3) The Lady Bird Johnson Wildflower Center says that Fragaria virginiana serves as a host plant for the larvae of grizzled skipper and gray hairstreak butterflies.

4) I'm always on the lookout for groundcover candidates -- especially natives. Kost says that F. virginiana can spread relatively quickly, especially in partial to full sun, but that wild strawberry has shallow roots that make it easy to remove the plant if it expands out of bounds.

Do you grow wild strawberry? If so, what has been your experience with this plant?